A 40 year old male presents with nausea, vomiting, and abdominal discomfort. He appears very anxious. You obtain a plain film of his abdomen which is shown below. 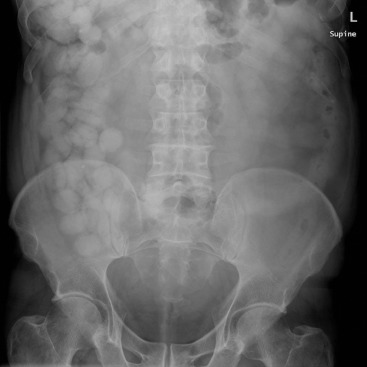 What is your next step in management?

This is a case of body packing, which is a method patients may use to try and smuggle drugs during travel. Due to the cocaine being contained in packets, patients may not exhibit the typical signs/symptoms of cocaine toxicity (tachycardia, HTN, chest pain, diaphoresis). In this case, polyethylene glycol, which is an osmotic laxatives can be used in combination with whole bowel irrigation to help excretion of the packets. In addition patients should have 2 large bore IVs placed, be on continuous telemetry, and be admitted to the ICU due to the high risk for packet rupture. Patients should have subsequent CT to confirm excretion of all packets.